We arrived to CTAM by LC-130 on December 9, 2013 after a few days on hold in McMurdo. The put-in to action came as a surprised as we started the day listed in red on the flight board, but we came ready quick when it went green. We had to wait three nights at CTAM on the way in because there was fog down on lower Beardmore Glacier where we planned for our field camp. The Twin Otter crew stayed out with us and we were all ready for transport when the skies cleared on December 12. That day we got 5 loads in, taking about 1.5-2 hours round trip from CTAM to the site at Beardmore. The next day we were all setup at the spot we would occupy for the next 4 weeks. 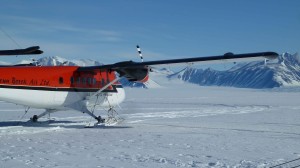 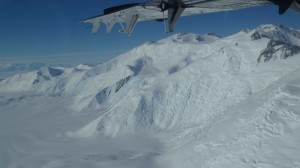 Photos from the Twin Otter during our put-in on the ice shelf just downstream of Beardmore Glacier. The flight over from CTAM was just as glorious. 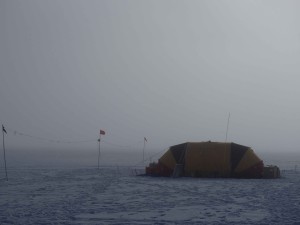 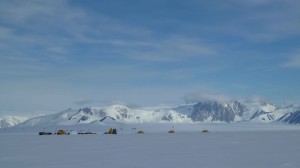 Overall we had exceptional weather out there, with only a bit of fog (example in photo), two days of snow, and one night of wind > 10 knots. Kind of unbelievable, but we were glad to take it. During the weeks we lived out of this camp, just 5 people self supported with the gear and food that we brought with us. We lived quite comfortably and the good weather helped. We had satellite imagery to guide our choosing of safe locations to travel around, and spent time at the start of trip to probe out any questionable areas. There were many crevasses nearby in this active region so we were extremely careful! 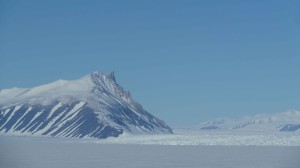 Mt. Kyffin (the sharp peak) was always a pleasure to see. The grounding zone of Beardmore Glacier is to the left of the peak and in the foreground is the Ross Ice Shelf.