We have been and are still waiting in McMurdo Station for our flight to Beardmore Glacier. While waiting, I have a chance to put together some blog posts!

The station has some highlights: interesting walks, interesting people, and interesting history. We went to visit Captain Robert Falcon Scott’s Discovery hut near the station. Built in 1902, it is now being renovated to stave off further damage to the structure and to the artifacts inside. While primarily used as a depot, we were told how at one time men had to live for months in a quarter of the hut after the main part of the facility was blocked with drifted snow that they no longer could chip away. It is impressive to stand in this piece of history, smell the past, and face the time past through shreds of magazine from 1903. Some 500 artifacts remain, which is a small amount compared to other major huts like the one at Cape Evans. Sir Ernest Shackleton and his teams also used this hut, even though he and Scott were not exactly friends. 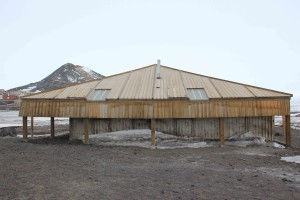 Discovery hut feels like a living legend. Positioned in proximity to the largest research station on the continent (capacity over 1300 people), it is a view very different from that seen by those who built it. McMurdo Station was named after Archibald McMurdo who was onboard the H.M.S. Terror (the ship) under James Clark Ross (British commander) that charted the region in 1841. Then and now the site is prime for a base station because it can be accessed by ship and has bare ground with a location relatively far south. The United States opened McMurdo station in 1956.

During our field season this year I delved into the diaries of the first Antarctic explorers. This was motivated by working at Beardmore Glacier, which was first surveyed by Shackleton on his attempt at the South Pole and more famously as the route used by Scott and his men on the journey to the pole and back that took their lives. This part of the Ross Sea has been host to a significant amount of Antarctic activity. 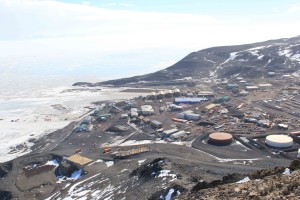 There were many seals perched on the sea ice, soaking up sun before soaking in the icy water. While we hoped for more views, we did have a minor (but notable) penguin sighting from McMurdo at the end of the field season. In mid-late January there are often reports of penguins shuffling and sliding near town; we were ready to succumb to all the adorable behaviors they might display. However, we were limited to some squints through binoculars at distant black blobs. But the wings could be seen flapping, and they were running as a cluster. I am always impressed at the collective love and fascination with these charismatic animals (myself included!).