Aug 15:  On the first day of our program, I took the 5C bus southeast towards downtown where I would check in at 3pm at the hostel and meet my fellow students who had also decided to adventure to Greenland in the month before school started. I had two backpacks balanced on the front and back of my body, and when I got off the bus downtown, I blended in with the other tourists and backpackers and wanderers.

Copenhagen was a city on the sea, like Seattle in a way, so I compared the two. I was jealous of the wide, separated bike lanes, and the ratio of bike traffic to car traffic on a weekday heading towards the center of the city. I marveled at the man-made swimming spots along the canal, and the way in which the new bridges and buildings that were brought up as the world and Copenhagen modernized fit in well with the colorful older architecture. Old wooden sailboats and tugboats lined the canals downtown.

The group accumulated at the hostel in the afternoon, and we wandered around the city in search of food. One closed church and two parks later, jet lag took its toll. I was excited to go someplace wilder in the next few days.

Aug 16: We began the morning with a walk to the Danish Arctic institute. There, we were greeted by Astrid and Frank, two researchers who focus on projects in Greenland and the North Atlantic. The conversation was certainly not lacking as we discussed human interactions with ice, debated potential pitfalls scientific research, and explored global effects of climate change.

After our lunch break, we went across the street to the Greenland representation for a fantastic overview of Greenland politics and history. Greenland is an independent state within the Kingdom of Denmark. This distinction makes for an interesting relationship between the two governments. It was super helpful to get a holistic overview of this relationship before embarking on our journey.

That afternoon several of us explored the city. Walking along the canals we snapped a couple pictures of the iconic Nyhavn and public swim areas. We ended the evening with our first group dinner at Noma. Just kidding, we were actually at Riz Raz, but the food was very good. 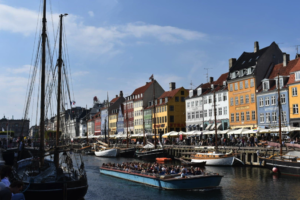 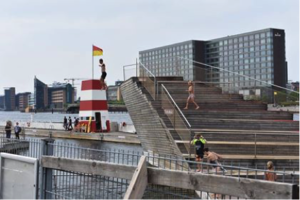 Public swim area off the canal with an awesome diving platform.

Aug 17: Our first glimpse of Greenland happened through the windows of Air Greenland’s’ singular Airbus, as we jumped out of our seats and crowded in the aisles. There were grey peaks sticking out of a draped white sheet of ice, as I looked out of the left side of the plane.

Our first breath of Greenland was… cold. The stairs out of the back of the plane were dangerous just because I was entirely focused on the wide, carved valley that ended in fog (which ended up delaying our flight by two hours). There weren’t peaks I could see, the hills were rocky and barren, ground down over thousands of years and recently uncovered. The airport was situated in a wide valley, and fog overflowed from behind us over the back of the rocky hills surrounding us.

The airport at Kangerlussuaq was the largest in Greenland. It had the largest runway in Greenland at 9219, and thus was the only airport in Greenland into which jumbo jets could fly. There are plans to expand the airports in Nuuk and Ilulissat, which are both bigger towns, in order to increase tourism in Greenland and bring in income. Income obviously is necessary for Greenland to succeed in the future. Its worrying that an increase in tourism might degrade the natural state of Greenland, yet tourism might also serve to prologue the life of local traditions as they become monetarily valuable to view for outsiders.

Two delays later due to fog, we were in the air again, the land disappeared under clouds, and I passed out. When I woke up I would step out into an unfamiliar, cold, and ancient feeling place. I had the task ahead of convincing myself I was actually in Greenland. I couldn’t wait to wander.

Aug 18: Today was the first fantastic lecture from Michelle, Hans Christian, and John. We dove right into the basic earth and atmospheric principles that set the basis for climate science. Class discussion is lively with plenty of student participation and the occasional debate on the shortcomings of certain climate models (thanks HC).

What’s the best thing about Ilulissat? Sledge dogs everywhere. Just a few years ago there were twice as many sledge dogs than people in Ilulissat. In recent years, dog population has dwindled due to the popularity and ease of snowmobiles.

This afternoon we went to the home of Ole and Trina to eat their delicious Greenlandic desserts, learn about life in Ilulissat, and meet their sledge dogs. This experience was eye opening as it introduced us to life in Greenland and their sledge dog culture. Definitely a highlight of the trip so far. 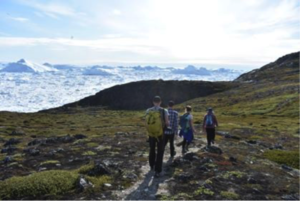 The blue trail in Ilulissat

Aug 19: The hills surrounding Ilulissat are barren and rocky, the only vegetation being tundra. Travel in the winter can be achieved through dogsled and snowmobile. With the environment in the summer being noticeably cold, I’m curious and amazed at the survival of people living year-round in Greenland during colder times in the past.

The first people in Greenland were likely the Saqqaq culture first 2500-800 AD, and were closely related to people from Siberia. They lived in small tents and mainly hunted marine animals. Next were the Independence I 2400 BC – 1300 BC, which likely evolved into the Independence II and Dorset cultures from 700 BC to 1 AD. The late Dorset lasted from 700 AD to 1300 AD. The Norse arrived in 980 when they were blown off course after attempting to sail to Iceland.

The Norse settlement lasted almost 500 years but were never able to adapt their culture the worsening weather as the little ice age settled in. Farming wasn’t successful, and the Norse settlement never learned to use the same hunting techniques as the Inuit. From 1300 CE to 1400 CE the Thule arrived and settled in Northeast Greenland. The modern Inuit are descendent from the Thule population. Thule adapted well to the environment and archeological evidence shows that the Thule were able to survive without using all parts of hunting kills.

Colonizing efforts by Norway and Denmark then started in 1711, in which settlers included missionaries. During World War II, Greenland was more tied to the United States and Canada as Denmark was occupied by Germany. The airbases which preceded the present-day airports around Greenland were built during this time.

It’s mid-August in Greenland, and it is already cold for us. The survival of the different waves of people show us strength, the ability to survive in the harshest of places, the ability for humans to travel, and the ability to create things of beauty through it all, and this is why the history of survival of the people of Greenland is fascinating in a time of drastic change in the world.

Aug 20: For lecture three we discussed orbital parameters and other climate forcings. It was eye opening to model the alterations that occur in the tilt of Earth’s axis, direction of Earth’s axis, and orbit around the sun using a water bottle. We began to put these principles in the context of glaciation and interglaciation.

In the evening we went on an ice fjord boat tour and the humpback whales were out putting on a show. They were breaching and diving all around the fjord. That, along with the iceberg backdrop, made for some fantastic pictures. 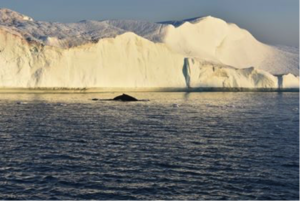 Written by Irene and Jake