The day started with a lecture at 10 am in one of Hotel Arctic’s conference room. It had a beautiful overlooking view of the bay and icebergs. The lecture discussed changes seen in the Greenland Ice Sheet.

At 2:20 we walked over to the history museum, which overlooks the water and has an expansive view of icebergs floating by. The museum, while small, held a lot of history about the four groups of Inuit that came to Greenland, information about Arctic explorers, and educational videos highlighting seal hunting with dog sleds. Around 3 we left the museum and headed over to the art museum run by Ole, who we met earlier in the week. On the first floor there was a small gift shop along with sketches and paintings from Emanuel Peterson and local indigenous artists. Upstairs there was a rotating exhibit of screen prints from Cape Dorset artists’ highlighting different scenes like a Inuit game, caribou, and Arctic birds. After looking through the exhibit everyone filtered into the gift shop and bought small post cards and large posters. Some of the group found a children’s book highlighting a flying whale and had H.C. translate the book from Danish to English.

After dinner we decided to watch “Chasing Ice” a documentary following a photographer and his pursuit to document changes in glaciers in Iceland, Greenland, and Alaska. The set up to watch the documentary was comical as we tried for 30 minutes to get the projector to work, the outlets to turn on, and correct computer cords. The documentary kickstarted a conversation regarding how the focus was more on the photographer than the issue of climate change and how it would be different if the photographer was a female.

August 22
The whole day was reserved for a day boat tour to Eqi Glacier from 9 am to 6pm. We boarded the boat at 9 am and left for the Eqi Glacier. Most of us stayed on the top deck in the morning and took countless photos of different icebergs. Around about 12 we passed a large waterfall to our left. After traveling 80 km we reached Eqi Glacier where we watched several calving events unfold for about an hour before heading back to Ilulissat. On the way back we spotted two humpback whales. 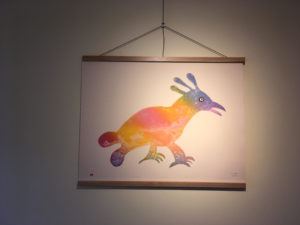 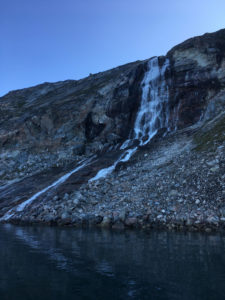 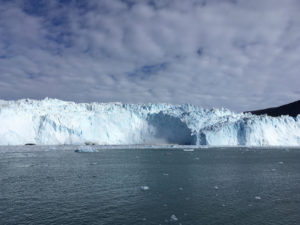 On Thursday, we had a chance to decompress a little and reflect on our time in Ilulissat. After our morning lecture, we got to meet with Mark Schleck and Mary DeLorme with the Scan|Design Foundation, the organization that supported this amazing trip for each of us. We ended our last night with a delicious homemade green curry made by Sarah, with a surprise apple cobbler dessert. Personally, some of my favorite moments of this trip are fun things like this, where we cram 17 of us all into one little room and talk and share stories over a delicious dinner. Everyone has such amazing experiences and perspectives to share about these new places.

August 24
Friday, we were up and all moved out of our hostel by 6am. Our ferry boat to our next destination, Aasiaat took off at 7am down in the harbor. The trip was set to be a 5-hour boat ride on a windy day, so we were expecting a large ferry to help us make the journey. Instead, we were greeted with a 36-passenger tour boat that couldn’t have been more than 15 feet wide. Everything was smooth for the first two hours, until we made our halfway stop in Qasigiannguit to pick up a few more passengers. 45 minutes past the stop, the captain got a call that there were two people in Qasigiannguit that missed the stop but needed to get on the ferry. So naturally we turned the boat around and backtracked 10 miles to get them. Once we got back on our way again, it got MUCH windier. At first, everyone was laughing at how much we were rocking back and forth. But after 20 minutes, the smiles disappeared, faces got paler, and everyone got quiet. A few of our fellow classmates were soon leaning off the back of the boat, seeing their breakfast for a second time. Soon enough, we made it to Aasiaat, a smaller town right on edge of the Southwestern coast of Disko Bay. We had dinner at the Seaman’s home and everyone was very excited to finally get to a stable, stationary bed. It was a tough ride in the moment, but has quickly become a running joke of the trip. I’m very impressed with everyone’s ability to roll with the punches and be able to laugh at themselves afterward.

Today was a very busy and exciting day despite most of us having somewhat of a late start. After our very bumpy boat ride the day before, I definitely appreciated getting the chance to sleep in. In the morning after breakfast, some of us also explored Aasiaat, which despite being small, proved to have lots of very interesting buildings and scenic viewpoints.

In the afternoon, as a group we headed down to the Aasiaat Tourist Office, where met with Sørine, an extremely friendly and welcoming lady who taught us about the work she does. Sørine explained some of the basic aspects of life in Aasiaat, including the work she does rescuing sled dogs that need homes, and how sled dog pack dynamics work. In this conversation, Sørine also explained the importance of seal and whale in both Inuit and the sled dogs’ diets. Throughout this conversation Sørine was apologizing for detailing the importance of the seals, which I found very interesting, since it seemed almost as if she assumed we would be judgmental. Originally, before coming to Greenland I was a bit reserved about the idea of eating and hunting seals, but Sørine’s conversation helped me to realize how important it is for Greenlanders.

After our conversation at the Aasiaat Tourist Office, we then went to Sørine’s father’s house, for an amazing homemade Greenlandic dinner. Many of us had the opportunity to help Sørine in the kitchen, where we made a meal of fish soup, caribou, and potato salad. I really enjoyed getting a taste of traditional Greenlandic food, as well as the opportunity to hear stories from both Sørine and her father.

Once our dinner was finished, half of us went on a boat with one of Sørine’s friends, Martin, where we got to explore the area around Aasiaat for about three hours. First, we went whale watching, and while the whales were a bit shy, we were able to see a few fin whales. After looking for whales, we then went fishing, which was surprisingly very easy, and as a group we caught five cod, even though our first attempt at fishing was unsuccessful. After catching and gutting the fish we then took the boat to a small island that was inhabited by about 10 dogs, who are owned by local residents in Aasiaat. Martin explained to us that he and others keep the dogs on the island since that way they do not have to keep the dogs on chains, which is the law for dogs in cities in Greenland. At the island, we were able to get on the island as Martin fed the dogs. On the boat ride, we also were able to see the “whale graveyard” where whales were slaughtered. The water in this area was very clear, and in the water we were able to see the bones of various whales.

Once our boat ride was finished and we were back on land in Aasiaat, most of our group headed down to the local bar, where there was great live music. Overall, the bar was a great end to a very exciting day.

Today was our last day in Aasiaat, but it was packed with lots of very memorable activities. Half of our group headed to the harbor in the early afternoon to go on the boat tour with Martin, while the rest of our group headed back to the Aasiaat tourist office to meet with Sørine again to learn about Greenlandic mask dancing. Originally I was a bit apprehensive since I have no musical/dancing ability, but the experience turned out to be one of the most memorable on this trip so far.

Sørine began by explaining to us some of the basics of Greenlandic mask dancing detailing how it combines many different emotions, and actions while also depicting different animals. After some brief history, Sørine then began to describe her own experiences with mask dancing, and brought out some costumes for us to try on. I got to try on some shorts made of seal skin that unfortunately didn’t fit, as well as a traditional shirt made of a cotton blend and seal skin that Sørine explained was a popular style in the early 20th century. She also handed many of us accessories, including beaded jewelry and necklaces made of bone, and even did some of the girls’ hair in a more traditional Greenlandic style.

After taking pictures in the costumes and thanking Sørine, a group of us headed to Café 3 where we had the best waffle I have ever had (not an exaggeration), piled high with amazing ice cream. Once conquering the waffle, many of us headed back to the Seamen’s House where we then relaxed before watching La Glace et Le Ciel which detailed the experience of early glaciologists in Antarctica and specifically Camp Charcot. I really enjoyed the film, because it not only had beautiful cinematography, but also told an excellent story through the narrator, Claude’s, own perspective and old original footage. This movie spurred a lot of thinking in my mind, and while Claude explained near the end of the film how it is sometimes frustrating to feel as if you are not causing any actions to be made towards climate change, his story still inspired me a lot, and helped to give me hope for the future of climate science, especially on this trip being surrounded by so many passionate people who are all greatly interested in helping protect the earth. 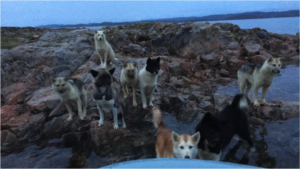 Dogs on an island near Aasiaat. 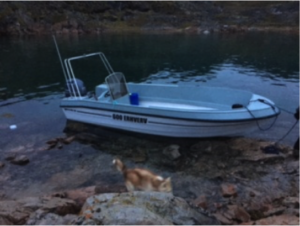 Boat for touring out of Aasiaat. 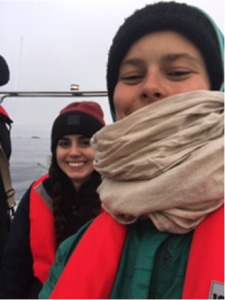 Lela and Katie on the boat.