We got onto the coastal ferry on the night of the 26th, hopeful that this boat experience would be slightly less traumatic. HC waited behind with Katie to take a cab to the ferry terminal since her ankle was still bothering her, but no taxi ever came… A hostel employee ended up driving them in his pickup truck. Our friend Sorena sent us off with a smile, and no one checked our tickets. By 2200, we had all taken various seasickness medications. We settled in for a bumpy night in our cabins with small beds and one shared bathroom for all of us. At 0900 we pulled in Sisimiut and some of us got off to explore. People started to wake up and went in search of coffee, but it was 15 DKK a cup and the hot water was the same price (we may have just taken some). People were mostly napping or catching up on reading after our eventful time in Aasiaat. The boat even had a movie theater! Some of us watched the Edward Snowden movie. The acting was questionable but it was an interesting and thought provoking movie. We drew connections between standing up against the US government to standing up against climate change. 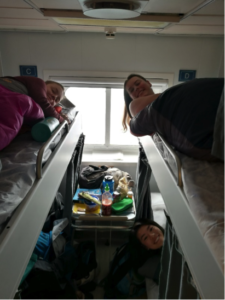 Betz, Katie, and Sarah illustrating the size of our rooms on the ferry!

At 1600 we met as a class in the large common space to discuss the documentary we watched the previous night. Michelle and HC were particularly interested in what emotions is evoked within us. Answers varied from frustration and anger, to happiness and hope. Then they asked us how the trip had impacted us so far. Full disclosure: there were tears. The main consensus was that we are thankful to be on this trip together and so far its been an absolutely life-changing adventure.

That evening, we trickled outside to look at the towering mountains and glaciers we were sailing through. On one side there was the mainland of Greenland and on the other side was Hamborgerland. Despite the -2 degree C temperatures, we stayed out there for at least an hour, taking pictures and dancing.

Jake and Karl disembarked to walk around after we pulled into Maniisoq at 2130, but the rest of us stayed on to play cards. We went to bed, anticipating an early morning, as we get into Nuuk at 0700. 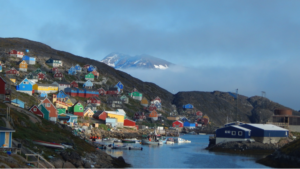 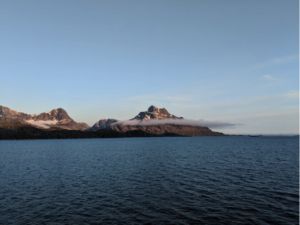 Hamborgerland, from the coastal ferry! 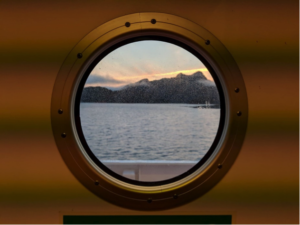 We arrived in Nuuk at 0700 and stumbled toward the nearby Seaman’s Home for coffee and breakfast. A shuttle picked us up at 0900 and provided a surprise driving tour of Nuuk. Our driver, Jesper, was helpful in orienting us with town and showing us a few views of the city. Next was a museum tour at 1100, where we saw a collection of historical artifacts and learned about the different groups of people who have inhabited Greenland. Artifacts included things like qajaqs (kayaks), harpoon heads, traditional clothing, and even mummies.

Afterwards, the group splintered for lunch before we met up at the hostel. We had three cabins on the rocks right above the ocean, with an unbelievable view of the fjord system. The rest of the day was relaxed, with a casual group dinner.

Our day began at 1000 with a presentation from the leader of the Greenland chapter of the Inuit Circumpolar Council. We learned about their relationship to the Arctic Council, and their internal structure. The role of the ICC is to serve 160,000 Inuit people from 4 regions of Alaska, Greenland, Canada and the Russian Chukotka.

As non-indigenous people, we’ve been grappling with what it means to be Indigenous and what it means to be Greenlandic. Its helped all of us to examine our own national and ethnic identities. Traveling is always interesting because it puts you and your preconceived notions in a different context.

After that, we explored downtown and the area near our hostel. There was a beautiful little peninsula behind our hostel that becomes and island at high tide. The geologists among us got very excited about some heavily banded rocks. One of our geologist friends stressed that the rocks are “EXTREMELY METAMORPHIC.” As this blog post goes to print, they’re still talking about the rocks.

That night we had a lecture. Michelle talked about ice loss in Antarctica and John talked about ice mass balance. Perhaps lectures after a long day aren’t the best for learning, as we got a little punchy. I didn’t think mass loss could be funny but apparently it is when you’re exhausted.

On Thursday we woke up to some extremely windy weather, but that didn’t stop us from bundling up for a twenty-minute walk to the University of Greenland. The University of Greenland is Greenland’s first and only university and is next door to the Greenland Institute of Natural Resources. Our first talk was at 1000 regarding the Greenland Perspective, a joint research initiative between the Universities in Greenland and Copenhagen. Their current projects span various topics such as food microbes, soapstone as a local resource, and Greenlandic sled dogs. We broke for lunch in the University cafeteria and reconvened at 1300 to learn about the Greenland Institute of Natural Resources. The small staff of 70 people is responsible with advising the government on the usage of natural resources be it fish stocks or whale quotas. We got a tour of the facility afterwards which included peeking in a lab that has just received samples from a humpback whale that had been caught locally. They had baleen, stomach contents, and a massive barnacle to study. The smell was pretty rancid, especially since there were two polar bear skulls being cleaned off in the same lab. The rest of the day was free time spent catching up on reading and watching The Secret Life of Walter Mitty, which we were devastated to learn was not actually filmed in Nuuk… 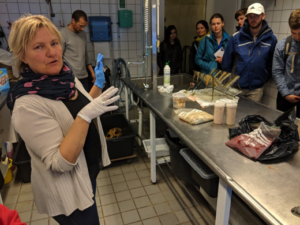 A scientist at the Natural Resources Institute describes how they receive samples of the whales local hunters catch. Notice the polar bear skull at center left.

We started our morning by visiting the Greenland Survey, where we talked to Martin Olsen, the head of the Department of Hydrology, Climate and Environment. The Greenland Survey gets funding from the Greenlandic Government for data acquisition on temperature, humidity, soil temp, snow depth, wind speed, and other climate monitoring metrics. This is used for both commercial/industrial projects as well as resource assessment.

Next, we went to the Greenlandic Parliament. We learned about the geopolitical landscape of Greenland, the general structure of their parliament (31 seats!), domestic policies and current issues debated in their government, such as the expansion of international airports in Greenland. We also got a tour of the parliament building, seeing where various committees met and relaxed. That concluded our activities for the day and we dispersed to shop, relax, and catch up on our assignments. Tomorrow we fly to Kangerlussuaq! 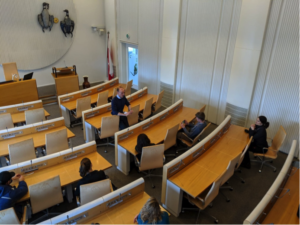 Overhead shot of the Greenland Parliament!

Written by Anna, Katie, and Ben