Our day started with the general chaos that ensues when you pack your life back into the tiny bag that you’ve been schlepping around for weeks. Getting 17 people and their belongings packed up and ready to move had only gotten easier in the past few weeks since our trip began, and soon everyone had piled into the cabin that we had been allowed to stay in past checkout time. Breakfast had been ongoing for several hours at this point, but Emily W. made a batch of scrambled eggs that everyone seemed to still have room for. As we passed the plate and ate what amounted to a second or third breakfast, the group surprised me by singing the most boisterous and extreme birthday song that I had ever heard in my life. There were laughs all around as we tried to incorporate multiple instruments into each verse and people tried to sing a song that only H.C. knew. We finished off with a cake that Katie bought, carefully sliced into 16 pieces that we proceeded to eat with our hands. The room was alive and the energy was palpable as we piled into Jespers’ van one last time for our short drive to the airport. The weather was the best it had been in days; I dare say it managed to reach 45 or 50 degrees. The sun was shining and there was no wind, a beautiful September day.

After dropping off our luggage and getting checked in, we wondered what we would do for the next hour or so. The lack of airport security facilitated our small excursion to the mountain behind the airport, and a large group of us walked across the parking lot to a small granite wall, maybe 10 feet high. After the initial wall, there was just a steep incline composed of small arctic ground plants and striated granite rocks that stood between us and a better viewpoint. We kept climbing until we reached a saddle where the view into the fjord system surrounding Nuuk was unparalleled. We could see the same jagged peak that was visible from our hostel, along with the pillars of some other mountains farther up the fjord. The snow that was present from halfway up the mountain only made it that much more picturesque. I sat and took in the view, soaking up the sun for the first time in days, feeling it warm up my skin in the absence of my jacket. It felt as if by the second I got there, it was time to turn around and go back. We started down the mountain in more or less a straight line towards the tiny little airport building. There is something very freeing about being able to walk whichever direction you want, unimpeded by trees or other obstacles. We shortly reached the building and sat and socialized before boarding our flight. 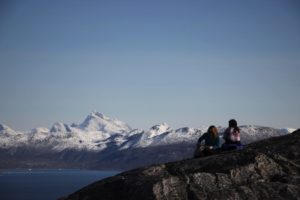 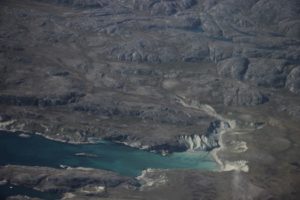 View from the plane from Nuuk to Kangerlussuaq.

It felt weirdly nostalgic to get back on the Dash-8. The last time we were on one, we barely knew each other. This time it felt like being on a 35 person bus with close friends. The flight was an experience in and of itself. Looking out the window yielded a different view in every direction, and soon we were flying over land between the ice sheet and some of the more superficial ice caps towards the coasts. The dusting of snow reminded us of the impending school year and the inevitable end of this incredible journey.

Although the Kangerlussuaq International Science Support building doesn’t look like much from the outside, it offers a retro chic interior that covers every basic need (they should hire me for their advertising department). The rooms are spacious and the company is unbeatable. After depositing our stuff we started our evening lectures, but not before I was surprised with yet another birthday activity. Sara had made an amazing video of everyone wishing me a happy birthday and we got to watch it on the big screen TV in the common room. John gave his last lecture and we made a break for dinner.

Enticed by H.C.’s stories of a weird Danish game played on a pool table, we headed to the local bar and hang out spot to learn from the professional. A very endearing Greenlandic man picked up the pool cue from H.C. and inserted himself into our game of billiards. He wasn’t half bad until the last round when he caused he and his partner to lose by a large margin. We all went to bed, excited to wake up the next day for our tour of the ice sheet.

This morning we woke up early for one of the most anticipated tours. Soon we would experience the Greenland ice sheet, a colossal mass with the potential raise the global mean sea level by seven meters.

After a quick breakfast at the Kangerlussuaq International Science Support building, we loaded into a “Truck-Bus” and started driving east. This rugged vehicle looked like a tour bus modified to travel on an extraterrestrial landscape. It made several stops along the way, allowing us to enjoy the scenery. We saw the wreckage of a US Air Force plane that crashed because conditions prevented the pilot from seeing the runway. A white-out snow storm and subsequent power outage at the airport were to blame, but luckily the pilot was able to eject and survive the incident. At the next stop, we had a distant view of the ice sheet as we enjoyed traditional Greenlandic sandwiches, complete with meat jelly and other unique flavors. 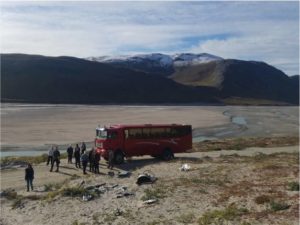 Tour to ice cap outside of Kangerlussuaq. 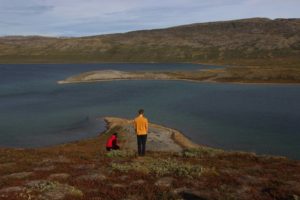 Near-fall colors outside of Kangerlussuaq.

After each stop, we were summoned back to the truck by the menacing growl of the diesel engine firing up, ready to crawl its way along the 37-kilometer gravel path. It crossed bridges so narrow that you could hear gasps from those with window seats, unable to see the bridge underneath the bus.

Two hours later, we finally arrived at the edge of the ice sheet. There was a fresh layer of wet snow so we left the crampons behind, grabbed trekking poles, and layered up for a hike into the unknown. The day welcomed us with moderate temperatures, light wind, and clear skies scattered with cirrocumulus clouds. After building a snowman almost as quickly as we could topple it over, we cheerfully set off towards the interior. Ahead of us lay a four-hour hike over treacherous crevasses and near freezing rivers concealed by an innocent looking blanket of snow.

The ice sheet was fascinating. We saw moulins created where rivers plummeted through the ice and disappeared into the abyss. There were crevasses so deep there was no telling what lay beneath. We visited the camp of explorers who had just spent the night on the sheet and experienced the northern lights. 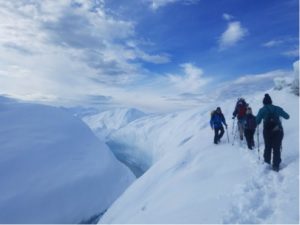 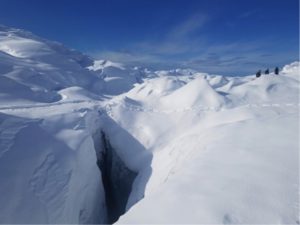 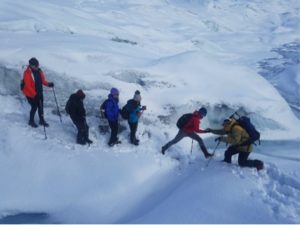 As we hiked farther, the terrain started to get more perilous. Winds had created both deep snow drifts and sections with thin layers of snow disguising slippery ice. It was a challenging hike but we worked together through the difficult sections. Everyone was quick to lend a helping hand and together we all made our way back to the bus.

On the drive home to Kangerlussuaq, we saw reindeer grazing on the hillside and an arctic hare bounding through the undergrowth. The group was happy to return to well-deserved warm food, hot showers, and dry beds. One by one we fell asleep to the distant hum of washers and dryers spinning round and round. 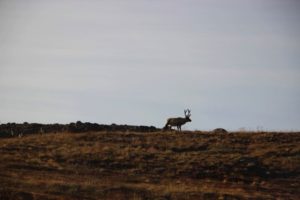 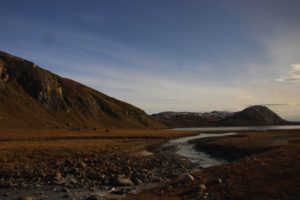 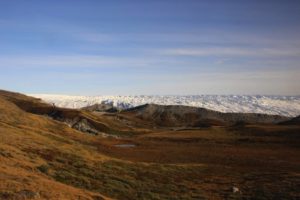 Today was a much-needed rest day after a very eventful 24 hours. After a relaxing morning, we gathered in the common room to present our ideas for our media projects to each other. I really enjoyed hearing everyone’s ideas and reflections on Greenland. While some of us took the afternoon to catch up on reading, a few of us made a return trip to the bar, where I proceeded to demolish Ben at a one-on-one game of shoemaker. In the evening we re-convened in the common room for a lively discussion on the sustainability and climate education. We made breakfast for dinner, which we ate while watching a double feature of the documentaries The Age of Consequences and Encounters at the End of the World. 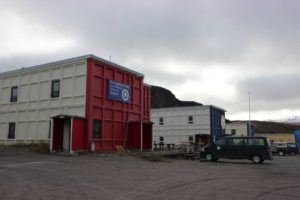 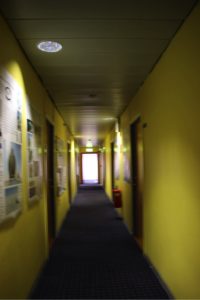 The hallways here were actually straight, but, long… 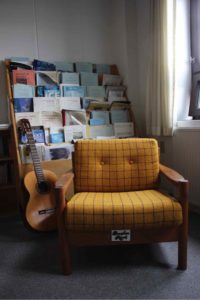 A few nods to the age of this place.

Before heading to the airport for our flight out of Greenland, we had an opportunity to tour the logistics warehouse for scientific operations on the ice sheet. We were shown around the facility by Kathy Young. After hearing so much about the various field sites operating on the ice sheet, it was exciting to see the supplies they use and how much care goes into preparing gear for months in the field. It was particularly interesting to see all of the clothing and boots used to protect from extreme cold, and to see several tents set up for repairs. While we were all milling around the pitched tents at the end of the tour we were told we could go inside one, resulting in a mad dash to jump in a tent for a group photo.

Flying east back to Copenhagen, we were treated to one final view of the southern tip of Greenland’s ice sheet. While we are all sad to leave Greenland, we made countless memories that will last a lifetime and several of us are determined to come back some day. Arriving in Copenhagen produced more culture shock than expected. Slightly jet-lagged and coming off the heels of staying in small Greenlandic towns, it felt like there were more people swarming around the Copenhagen baggage claim than we’d seen in the past two weeks in all of Greenland. Although it will take a couple days to settle back into city life, we are excited to receive more fascinating guest lectures and to experience all that this beautiful city has to offer.