Taking from basic sources of information about the Amundsen-Scott South Pole Station, I wanted to write about it before I arrived and then provide my impressions after spending a few weeks there. From a pamphlet put together by the National Science Foundation Office of Polar Programs, I copied here a description of the history and of the research station:

On December 14, 1911, Norwegian Roald Amundsen’s team of four arrived at the South Pole after an uneventful but carefully managed overland journey. Briton Robert Falcon Scott and his four companions reached the Pole about one month later on January 17, 1912. Amundsen’s adoption of techniques derived from Arctic exploration and his encounters with indigenous peoples there helped greatly in his quest for the Pole. His party’s fate contrasted starkly with that of Scott and his party. Beset with problems and weakened by the rigors of the return journey, Scott and his companions perished.

The honor of being the first person to stand at the Pole in 44 years went to Shinn’s passenger, Rear Admiral George Dufek, commander of the US Navy’s Operation Deep Freeze. But it was not until construction of the first South Pole Station was completed in February 1957 that people, motivated by science, returned to the Pole to establish a US Station there as one of a series of International Geophysical Year (IGY) observatories.

A US station has been continuously occupied ever since. In 175, the original IGY station was replaced by a new station, sheltered under a now-iconic geodesic dome. On January 12, 2008, the National Science Foundation (NSF) dedicated a new research station at the geographic south pole, the third successive US station at the Pole since 1957.

Fuel and cargo storage, waste-management facilities, maintenance garages, and a power plant for the new station are located beneath the surface of the snow. Housing, dining, recreation, administration, science, and communications are located in the new building. The station stands on the Antarctic plateau at an elevation of 2,835 meters (9,300 feet). The ice sheet below the station moves about 10 meters (33 feet) in one year, or about one inch per day toward the Weddell Sea. Between late-October and mid-February, ski-equipped Hercules airplanes (LC-130s) from McMurdo Station bring supplies and passengers to the Pole. During the rest of the year the station is isolated, but people do stay through the winter. 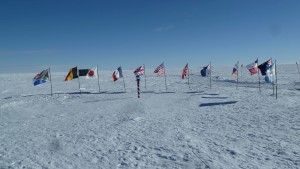 Due to the Earth’s tilt, the South Pole experiences one sunrise and one sunset each calendar year. However, twilight lasts for several weeks after sunset and before sunrise. Surprisingly, winds at South Pole are not very strong. Though the wind is constantly blowing, and it typically averages 10.7 knots (12.3 mph). The highest wind ever recorded was 51 knots (58 mph) in September 2011. The lowest temperature ever recorded at the station was -117 F (-82.8 C) in June 1982, and the highest temperature ever recorded was +7 F (-13.6 C) in December 1978. Lower temperatures have been recorded elsewhere in Antarctica.

The station supports science year round, but the number of people housed at the station varies widely by season. During the height of the Southern Hemisphere summer (December and January), up to 200 science and support personnel may be housed at the station and in nearby structures. In the austral winter, that number drops to an average of 50. 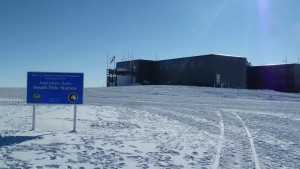 The South Pole Station and its immediate surroundings have been divided into the following sectors. Each one provides a specific environment required by the activities established there. Operations Sector: houses the main station and general operations. Clean Air Sector: ensures a pristine air and snow sampling environment for climate research. Quiet Sector: an area where noise and equipment activities are limited for seismology and other vibration-sensitive research. Radio Frequency Sector: reserved for communications equipment. Downwind Sector: an area free from obstructions for ballon launches, aircraft operations, and other downwind operations. Dark Sector: provides and area free of light pollution and electromagnetic noise for astrophysical research.

The conditions that exist on this cold and high polar plateau make it well suited to certain research, especially in astrophysics, climatology, glaciology, seismology, and geospace sciences. The extremely cold and stable atmosphere above Antarctica is ideal for observing stars and galaxies of the early Universe with radio telescopes that look at different wavelengths outside of the visible spectrum. Other experiments are designed to test and confirm theories about particle physics, measure ozone depletion in the stratosphere, and monitor space weather that could disrupt satellites or affect power grids on Earth. In recent years, as the new elevation station was being built, two large science projects began.

In December 2010, construction of the world’s largest neutrino observatory was completed at the South Pole, built on top of the ice sheet but deep within the ice using strings of sensors that encompass a cubic kilometer. IceCube records the rare collision of neutrinos, elusive subatomic particles, with the atomic nuclei of the water molecules in the ice. Trillions of neutrinos stream through the human body at any given moment, but they rarely interact with regular matter. Some neutrinos come from the Sun, while others originate from cosmic rays interacting with the Earth’s atmosphere. Scientists are extremely interested in true cosmogenic neutrinos that originate from astronomical sources such as exploding stars in the Milky Way and other distant galaxies. Analyzing data between 2010-2013 the team has observed the first astrophysical high-energy neutrino flux ever.

In February 2007, the South Pole telescope became the largest radio-telescope every deployed in Antarctica. It stands 75 feet (22.8 meters) tall, has a 33-food (10-meter) diameter dish and weighs 280 tons. The telescope is designed to study the Cosmic Microwave Background (CMB), the faint afterglow of the Big Bang when the Universe burst into existence about 13.5 billion years ago. It provides astronomers a powerful new tool to explore Dark Energy, the mysterious phenomenon that may be causing the expansion of the Universe to accelerate.

The South Pole has some of the cleanest air on Earth. Monitoring the air can help scientists provide a baseline for understanding trends in more polluted areas. The record of atmospheric composition at the South Pole, which began in the 1950s during the IGY, provides some of the longest continuous measurements of atmospheric gases, including greenhouse gas carbon dioxide. The National Oceanic and Atmospheric Administration (NOAA) operates an observatory here in the Clean Air Sector to make these measurements, which include monitoring the annual depletion of ozone by manmade chemicals in the stratosphere above Antarctica. Proximity to the geomagnetic pole allows ground-based studies of the Earth’s magnetosphere, that interacts with the solar wind plasma in the near-Earth space, transferring its energy and momentum to the ionosphere and upper atmosphere. This research includes studies of the aurora australis, a natural light display in the sky caused by the collision of energetically charged particles in the upper atmosphere.

I have described aspects of the ice-core research in another post. In support of ice-core interpretation we will conduct our work partly in the Quiet Sector, but will stay away from the South Pole Remote Earth Science and Seismological Observatory (SPRESS), which is located 8 km grid SE of the station. Once we are more than 20 km from South Pole Station we will not interfere with any sector boundaries. 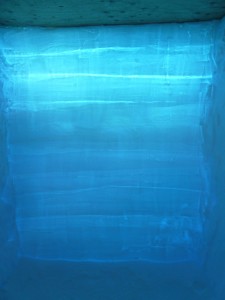