This is the first season of a new collaborative research project on Characterization of upstream ice and firn dynamics affecting the South Pole Ice Core (SPICE). Details about the SPICE core can be found here: http://spicecore.org/

Our team from University of Washington includes Howard Conway, T.J. Fudge, Ed Waddington, and Max Stevens, and team members from Dartmouth College include Bob Hawley, Erich Osterberg, and Mary Albert. This is a 5-year project that has been funded by the National Science Foundation. Here is a brief description of the project from our proposal:

Developing an array of cores spanning 40 ka is a goal of the international ice-core research community in order to understand the spatial pattern of large climate changes. An intermediate-depth ice core (to ~1500 meters depth and ~40 ka) is currently being drilled at South Pole. Low annual average temperature (-50 C) and relatively high accumulation rate (8 cm/yr) make South Pole ideally suited to preserve atmosphere trace gases and to record climate interactions of the West and East Antarctic ice sheets. However, South Pole is far from an ice divide, and ice recovered at depth originated tens to hundreds of kilometers upstream. No reliable measurements of surface velocity exist in this upstream catchment, so the flowline to the core site is unconstrained. The spatial pattern of surface temperature, accumulation rate, and water stable isotopes are similarly unknown. Without this knowledge the spatial and temporal variability of the climate cannot be accurately inferred.

In addition, firn-densification models are needed to establish consistent chronologies from the ice and for the trapped gases, by directly calculating the ice-age/gas-age difference (referred to as delta age). Most firn-compaction models are empirically tuned to modern depth-density profiles using only modern accumulation rate, temperature, and surface density as parameters, all assumed to be in steady state. South Pole today is only marginally in the calibration range, and was outside the calibration range at the Last Glacial Maximum. As gas sampling and analysis improve, a next generation of firn models is needed. New physically based firn models calculate firn strength based on density and texture, which itself may depend on chemistry, and calculate compaction rates from a constitutive equation relating strength and overburden load. Deriving appropriate constitutive equations requires concurrent measurements of density, temperature, strain rate, texture, chemistry, and most important, firn-compaction rates, all on the same firn column. This has not been done before.

To quantify the influence of upstream flow on the SPICE core, we will determine the flow field and spatial gradients in accumulation, temperature, and water stable isotopes upstream of South Pole through a combination of field work and ice-flow modeling. To improve delta age calculations, we will continuously measure firn strain rate and firn temperature in core holes where density, overburden load, and firn texture are also known, and these data will contribute to a next generation physically based, transient firn-densification model. This work contributes to the interpretation of the climate records from the South Pole ice core and to the development of firn models.

During this project we will address these questions:
– Where did the ice in the core originate?
– What is the impact of advection of ice from upstream on climate records?
– Is climate variability coherent in the upstream catchment?
– What is the accumulation history?
– Do current firn models calculation the right firn-compaction rates?
– What is the constitutive relation for firn densification? 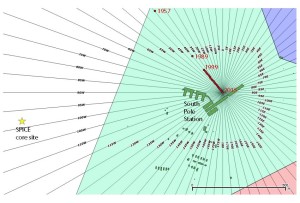 We know from how past geographic pole locations have been surveyed that the ice is moving about 10 meters / year at the pole.

Twit and I arrived to South Pole Station on December 28, 2015 and returned to McMurdo on January 13, 2016. After two days to prepare our cargo, we began surveying the ice-flow field upstream of the South Pole Station (and the SPICE core drill site) on December 31 and we had 12 full days for our work. We traveled by snowmachine to survey metal poles at distances up to 50-100 km from the station, and placed them 12.5 km apart along lines of longitude between 111-180 E. In total we surveyed 40 locations, and 16 of these locations we were able to resurvey this season because the ice-flow speed near the South Pole is around 10 m/yr and approximately ten days of motion at ~2.5 cm/day should be detectable. We had GPS units logging continuously at 4 of these locations for the duration of our time at Pole.  We also collected kinematic GPS data to map out surface topography as we traveled to sites in our network. 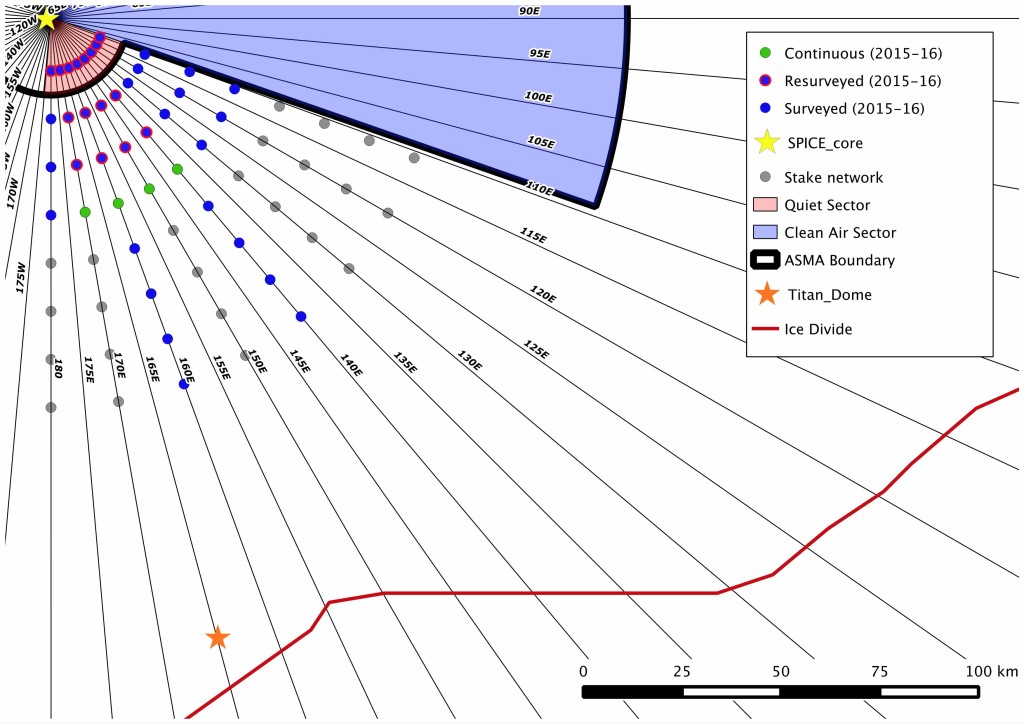 We were towing a warming shelter (the yellow covered conestoga), which worked great. Otherwise our gear was pretty straightforward (poles and GPS). 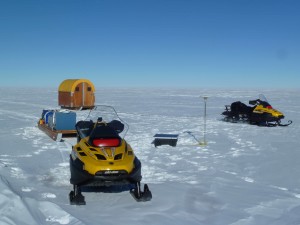 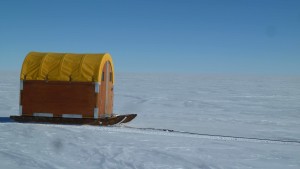 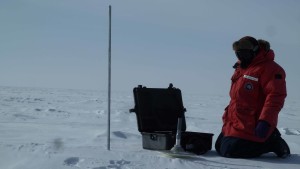 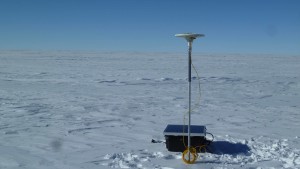 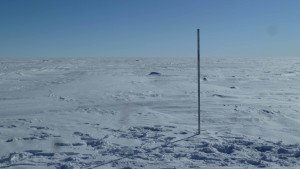